“People were gasping and looking at me as though I was a suicidal maniac”
In 1996 I had been receiving curenews since 1990, and in 1995 I wrote to a girl whose description I had read in the curefriends section. It was a bit silly since she lived not terribly far from where I lived. Anyway, back to 1996 which was my last year in school. The Cure announced a handful of big concerts at the end of May/start of June which was incredibly inconvenient for me given that my final exams began on June 5. To my horror they were playing Dublin, where I lived, the very night before my first exam.
In desperation I even wrote to Fiction and explained that an entire cohort of 18 year olds would not be likely to attend given the unfortunate date scheduled, and I received a letter back from Ita Martin which was polite but disabused me of any adolescent hopes I entertained that the date might be changed. 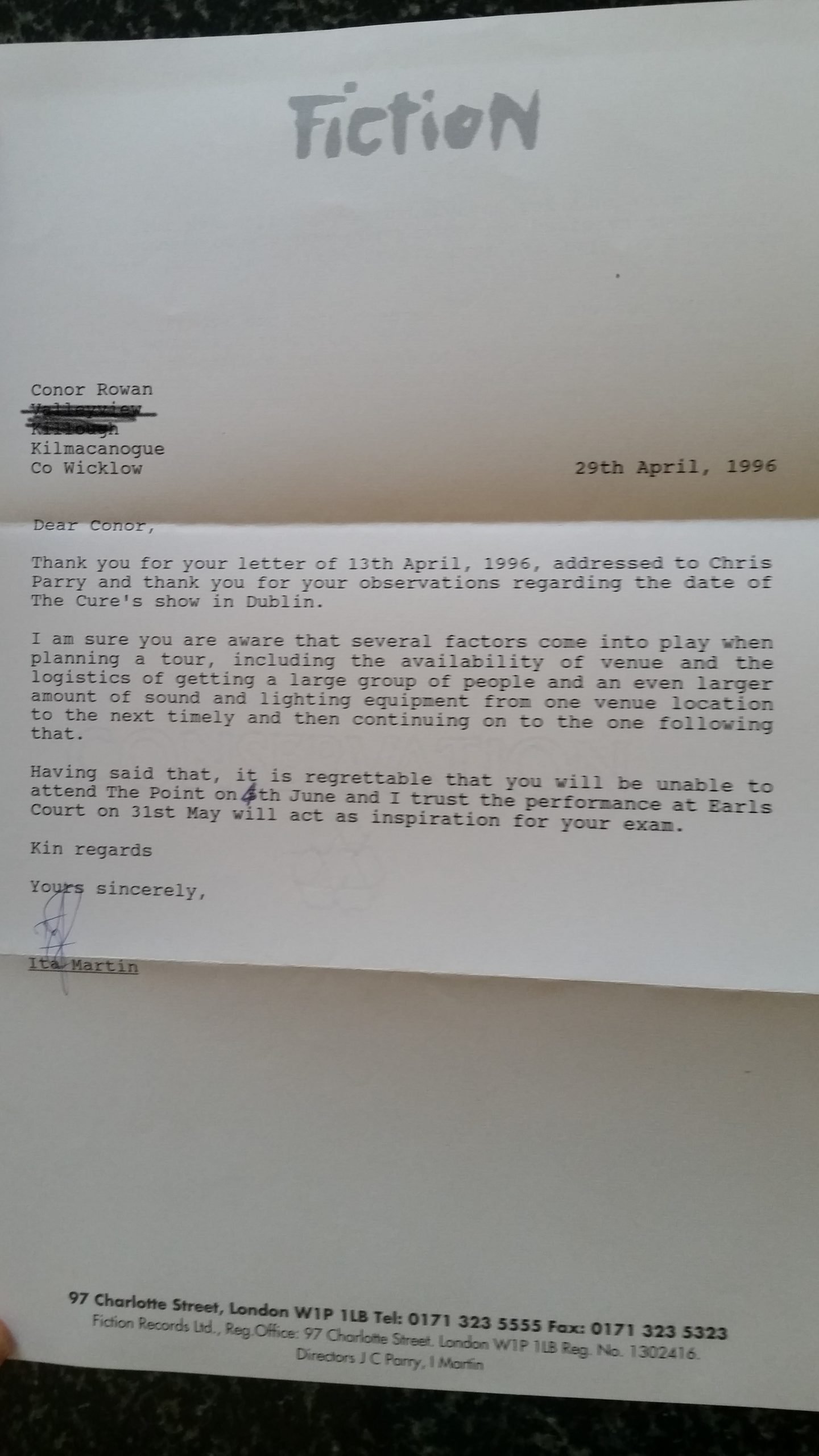 Seething in frustration I decided to go to the London concert in Earls Court four days before the Dublin concert. In the end I threw caution to the wind and went to the Dublin one too! Anyway, in a letter to my curefriend I mentioned that I was going to London and she decided to come too. Cheapest option was the ferry to Holyhead and then the overnight bus to London. We had never physically met or even exchanged photos but we had no trouble recognising each other at the port for obvious reasons. The crossing over to Holyhead was pretty choppy and we dissolved any natural shyness or first-meeting awkwardness in frequent swaying visits to the bar. By the time I boarded the midnight bus in Holyhead I was not particularly ready for sleep.  I quickly realised, however, that I was ready and uncomfortably eager for a trip to the lavatory at the back of the bus. I waited a bit to see if the need to urinate would dissipate but the prospect of another 6 hours on the bus made a wobbly meander down the back of the bus unavoidable. Reaching the back I saw the steps leading down to the door so I pushed on the bar, and saw the lines of the motorway flashing by. I felt arms come crashing around me, pulling me back up the steps. People were gasping and looking at me as though I was a suicidal maniac. I sheepishly tried to convey that I was looking for the loo which it turned out was not down any steps but simply at the back. While in there I could hear the people who had saved me speculating as to my mental state. I had been one step from walking out the emergency door at 60 mph. I don’t think I slept that night but caught a couple of hours in the hotel before heading to an Australian pub near the venue. We went back the day after the concert, even though a second one had been added after the first one sold out. The concert in Dublin the night before my exams was much more enjoyable probably because I had a standing ticket. Later in the year I went back to the UK for the final three concerts of the tour, but I never would have made it back had I taken that final fatal step out the emergency door.
Conor Rowan
Share this letter