Solidarity had won the Polish elections, Glasnost was the “in word”, Microsoft released Office & the 486 PC was the pinnacle of technological wonder.
Oh,the Chinese had recently massacred several hundred students in Tiananmen Square, just because they had voiced their own opinion.
It was a Monday I awoke late, as I didn’t have to work that day.
Good job though, as the previous night’s “recreational activities” had somewhat taken their toll as I was suffering a little.

I was a 20 year old goth living in a shared house with my Girlfriend Karen and a few other crazy heads.
Karen had a late shift at the nursing home she worked at. I had bugger all to do.
Eventually, after wading through the wasteland of empty wine bottles, discarded clothes, I got myself cleaned up ready for some lunch.
Karen & I wandered to a local pub (Ye Olde House at Home, which was on the edge of Broadwater village in Worthing, West Sussex) for some lunch.
As she was working, she kept it to just the 2 snakebite & blackcurrants, I quaffed draught Bass, on account that they had no Newcastle Brown.
After pint number 2 & a hearty meal (a hot-dog), I announced to Karen that I was going to jump on the train to London for the show.
Having run her to work in my black mini, I headed back to the house to select suitable buckles & studded things to get really “gothed up”.
On the way to the station, I stopped at the off license (liquor store) procured a couple of bottles of Merrydown cider, some cans of Newcastle Brown Ale (just to keep me topped up on the 90 minute train journey).
A couple of trips to the train loo for some other recreation stimulus (no longer do that & don’t recommend to anyone) I was wide eyed & ready for anything.
Arriving at Wembley arena, I had to find the box office (I had no ticket by this time, so my journey may have been in vain). 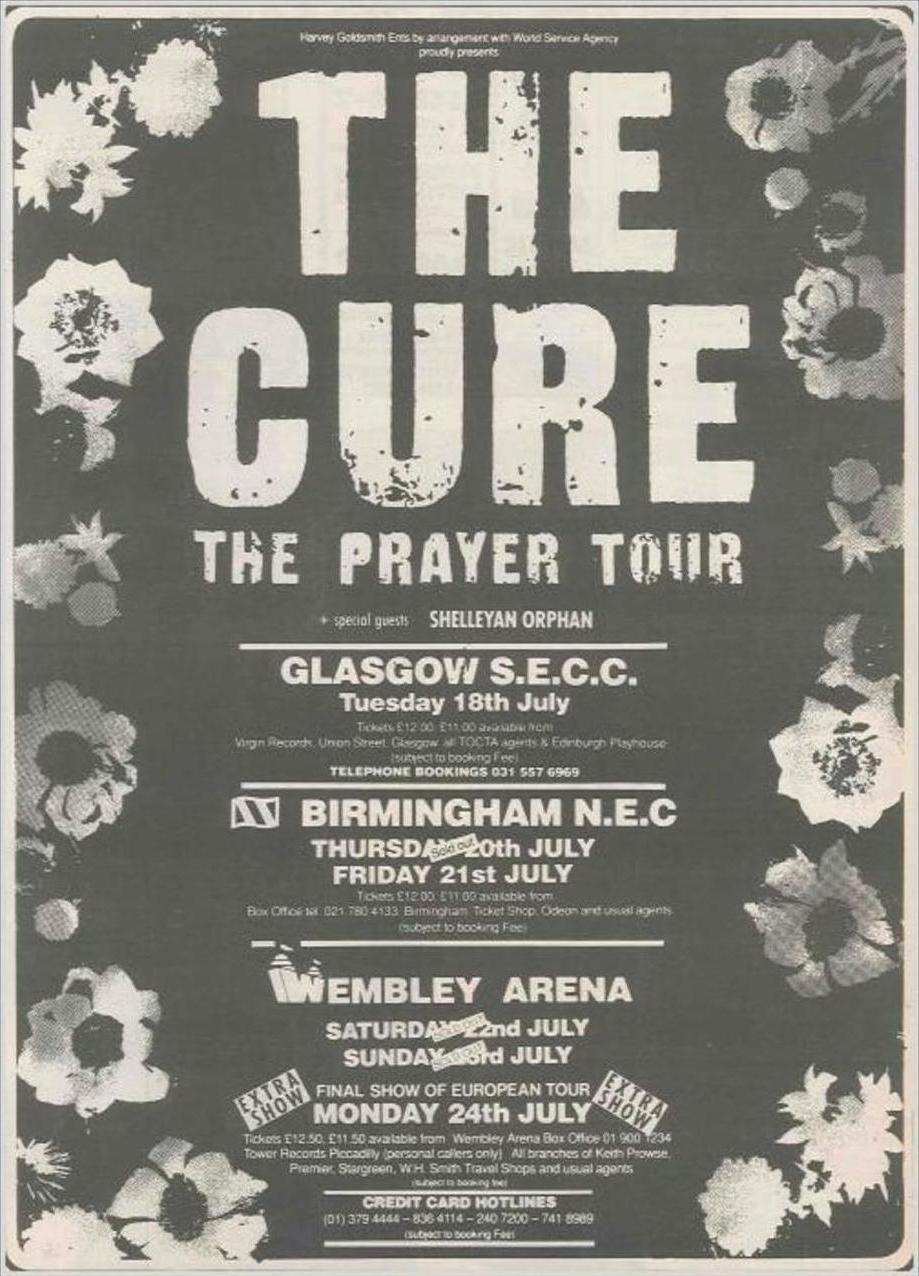 Once located, I stood in a surprisingly short queue & was overwhelmed to find there were still a few tickets left. Needless to say, I bought one.
I missed Shelleyan Orphan (no great loss really), as I ambled around inside the venue stopping only to “re-hydrate” with over-priced, watered down ale.
Eventually, I made my way into the arena which had the floor space divided into a standing section at the frontseats from about a third of the way back separated by a flimsy barrier patrolled by a few security people. I had a seat in row 20. As the lights went down, I saw a chance & jumped the barrier (along with a number of others).
Wind chimes, smoke, purple light washed over the crowd then Plainsong opened what was to be the best show I had ever seen.
I was mesmerized by the inclusion of some old, not often played songs (Drowning Man, Siamese Twins) & who can forget that “Raaaaaaaaaaaaaaaaaaaaaaaaiiiiiiiiiiiiiiiiiiiiiiiiiiiiiiiiin”????.
The band was having fun, the performance reflected that. A Forest rooted me to the spot of course, Faith just sent shivers down my spine.
I didn’t think they were going to stop to be honest, I hoped they wouldn’t…

At the end, RS implied that they wouldn’t be back although this was not good news, I knew that if this was the last show they ever played, I was there I had seen them at their level best.
They played like it was their last show, gave it their all from start to finish.

On the way out of the arena, after nearly 3½ hours of pure excellence, I bumped into some other folks who’d traveled up from Worthing.
The last tube had departed we just didn’t care. Instead, we walked through London in the middle of the night on the 8 or 9 mile journey back to Victoria Station.
It took us over 3 hours, when we arrived, we had to wait for the first train out, so we survived the remaining 2 hours or so on coffee & garlic bread.
You know how when you see a film at the cinema that is so good, you are sort of stunned into silence? The atmosphere on the platform in Victoria was the same. A bunch of goths, re-running the show in their heads.
We caught some Z’s on the London to Brighton line (the same used in the video footage for Jumping Someone Else’s Train).
Arriving home, I woke Karen (who had done the night shift remember?) she wasn’t too thrilled.
I was just alive with excitement each time I hear that show, I feel that euphoria again.
Yes, my fave band is The Sisters of Mercy. Yes I have seen some class shows (Pink Floyd, Sisters, Mission, Roger Waters, Bunnymen, Manics to name but a few), but the 3rd Night of the Wembley run, still takes the crown for the best one ever.